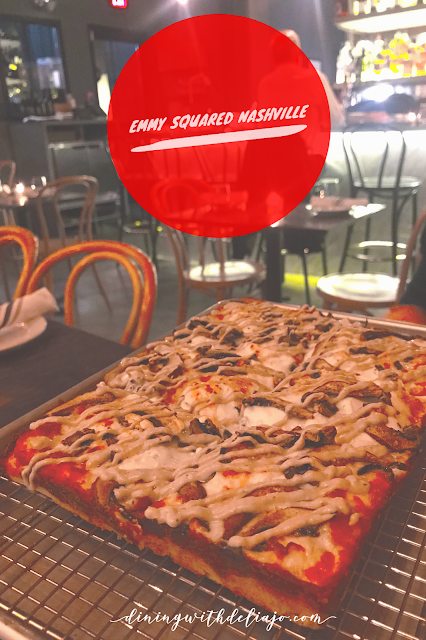 Emmy Squared opened several weeks ago in Nashville, and this girl has already eaten there four times. This should sound alarm bells in your head. Delia Jo doesn't repeat restaurants very often, especially when exploring her new city. When she repeats this frequently, it begs your attention. Now snapping out of referring to self in the third person. #sorrynotsorry

The new Gulch restaurant (located in the former 404 kitchen space) is the second iteration of Emmy Squared - straight outta Brooklyn, NY - and sibling to Emily (known her for small plates, pizza, and again, burgers). With a small space which accommodates around 60, the feel of the restaurant is intimate and cozy. Emmy Squared Nashville is their first restaurant outside of New York.

At Emmy Squared, owners Matt and Emily Hyland throw down a legit Detroit-inspired pizza, one you'll recognize easily by its rectangular shape and crispy, cheesy 'frico' edges,  If you're not familiar, the 'frico' technique involves drizzling cheese on the edges of the pizza, which creates a crispy dark brown crunch when you bite in. After baking, each pie is finished with signature saucy stripes and voila!

There are traditional pies like The Classic, Deluxe, or Margarita or more adventurous rectangles like the Colony², which comes with pickled jalapenos and honey atop my favorite combination - pepperoni and mozz (clearly this pie's my go-to). I've also become friendly with a white pie - the Angel pie - which is adorned with mozzarella, ricotta, mushrooms, and a rich Truffleist mushroom cream sauce. In all, there are 13 pies to choose from, with a mix of red or white-sauced renditions.


But don't be misguided, friends - there's much more happening at Emmy that you need to eat, in addition to pizza. Don't skip the starters, salads, or sammies. Begin with the wings or waffle fries. The waffle fries come in two fun varieties, you can "zia them" with hatch chili pimento cheese + bacon + ranch or "Okonomi them" with Kewpie mayo, Okinomi BBQ sauce, and bonito flakes.


For salad aficionados, look to the Caesar, Kale or even shredded Brussels sprouts to begin. (No, I don't have a picture of those. ;))

Beyond the pizza, you'll absolutely wanna order Le Big Matt. Don't even think about it. Yes, it's $19, but it's worth every penny. We're talkin' double-stacked grass-fed beef patties from Bear Creak Farm - layered with American cheese, greens, pickles, and a zippy Sambal based "Sammy Sauce", all on a delightful TomCat Bakery pretzel bun. I get extra Sammy sauce on the side because I dip my fries in it, too. Game changer. Rumor has it The Chicken Parm Sandwich is also a worthy contender, and the Spicy Chicken is also a clear winner. Can't go wrong here, y'all.


To wash down all the goods, there is a full bar in addition to a small beer and wine menu.

Well, folks. Looks like Nashville is officially on the map, culinary-wise. We've been known for our sound for years, but at long last the food is catching up with the culture. I couldn't be more thankful. 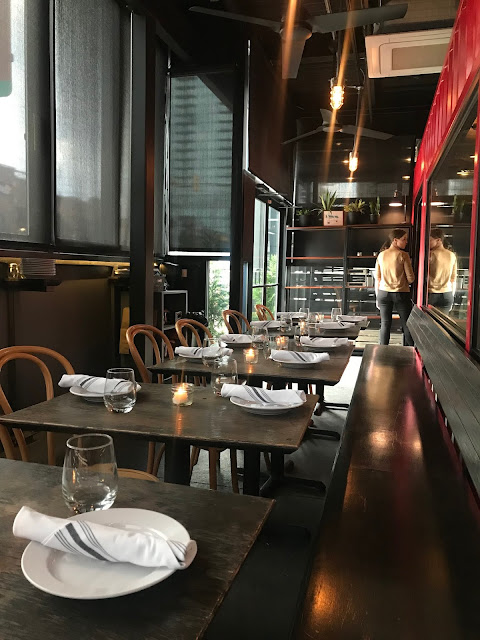