The Cochon555 US Tour hosts a yearly round of hyper-local food events in 14 major cities in North America. The tour's focus is to raise awareness for heritage breed pigs through an innovative "nose-to-tail" pig cooking competition.

Making a stop in Dallas on Sunday, February 11th at the Four Seasons Resort and Club Dallas at Las Colinas - Cochon555 will host 20 notable judges from the Texas restaurant industry. Names like Chef Kent Rathbun, Daniel Vaughn of Texas Monthly, Nicolas Yanes of Juniper (Austin), well-known Emcee Billy Harris, as well as their headline all-star butcher, Zach Dunphy from Commissary Dallas will be in attendance at the swine-centric event.

Guests will find samples of food cultures near and far, while learning about a safer, more honest food system. 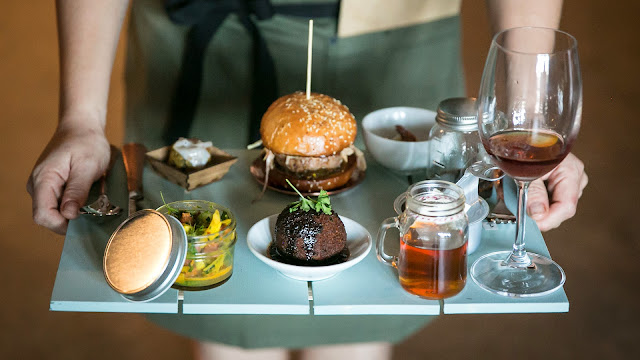 Since 2009, over 108,000 consumers have experienced heritage pork for the first time, and over $1 million has been donated to charities, plus another $1.2 million paid directly to their farmers. Expect educational and inspirational messages. In addition to the notable judges and expert chefs, 5 stellar sommeliers will take part in the third annual "Somm Smackdown" where they'll compete to find the best wine to pair with the prepared pork dishes. This year’s somms include Emily Tolbert of Del Frisco’s, Houston, Courtney Keeling of Graileys, Cameron Cronin of Sachet, Julia Dixon of ArtProWine, Austin, and Alicia Schmidt of Emmer and Rye, Austin. Additionally, “Punch Kings” features five of the city’s top barkeeps facing off in a whole-bottle punch bowl competition, challenging them to each make their own twist on the original, historic large-format communal libation righteously prepared with Breckenridge Bourbon.

At the end of the day, one chef will be crowned for their whole pig cookery skills, and will also win an incredible 4-day wine and culinary experience in Rioja - the most prominent wine region in Spain.

For more information, visit www.cochon555.com or follow @cochon555 on Twitter and Instagram.
The event also benefits a greater – and absolutely delicious – cause in the form of Piggy Bank, a farm-in-the-making devoted to sharing free heritage breed genetics with small family farms.

Tickets for general admission start at $130; VIP tickets (early admission + exclusive access to taste entries from the Somm Smackdown and Punch Kings competitions) are $200; and to purchase tickets, visit the website: http://cochon555.com/us-tour/2018-dallas/.

Popular posts from this blog

By DiningWithDeliaJo July 01, 2017
The Halal Guys recently opened their newest Dallas area location on lower Greenville, the third in the area. The company has plans to expand further in the DFW, with the next being in north Plano in the coming weeks. The company began as a street cart in NY and now has grown to locations throughout the US and worldwide. Talk about a success story! The Halal Guys is an excellent choice for those who want to eat healthy without breaking the bank. Wondering what exactly Halal means? I had that very question a few years back upon seeing it on a restaurant door, and googled away. I also recently wrote an article for Richardson Living explaining just that. It introduces the concept and talks a bit more about the Richardson location of Halal Guys and explains their menu.  The menu is the same at all locations of The Halal Guys. You go through the line, and build your own wrap or platter. Fill it with your choice of gyro, chicken, or combo, then load it up with toppings and sauce
Post a Comment
Read more

By DiningWithDeliaJo August 18, 2017
I've long been a fan of Razzoo's Cajun Cafe, a Texas born restaurant that features scratch-made Lousiana favorites. All locations are locally owned, and the 26-year-old restaurant has most of its locations in Texas, with one in NC, and some new spots TBA in the near future. Some of my favorite fried indulgences at Razzoo's are the "Rat Toes" on their appetizer menu. If you love a bit of spice, ignore the name and order up some of these jalapenos stuffed with shrimp, crab, then battered and fried, served with a Cajun Buttermilk sauce for dipping. And that's just scratching the slippery surface on all of the house-made delicious sauces at Razzoo's. National Hot & Spicy Food Day is Saturday, August 19, so in anticipation of that awesome food holiday, Razzoo's  invited us out for our own little sauce tasting, AKA Delia' Paradise. I was NOT aware that Razzoo's cooks up FIFTEEN different sauces in house, and once I found this out, I cou
Post a Comment
Read more

By DiningWithDeliaJo May 09, 2017
This week a large piece of my childhood will be laid to rest. I know you think I'm being overly dramatic, but if you've ever had an iconic place where you've spend a large chunk of your life, I hope you'll understand where I'm coming from on this.  I have literally 24 other restaurant story deadlines to meet, but today the only thing on my mind is the news I received yesterday. I found out by a fluke (an owner's response to a Facebook review I'd posted years ago), and ended up having to be the bearer of bad news to my family and friends who also hold this establishment near and dear to their hearts.  The first restaurant I ever loved is closing their doors this week. This is my farewell. El Palacio opened in Huntsville 51 years ago, in 1966. Jimmy and Nonie McClure opened the very first location in Amarillo in 1962 in a remodeled gas station, after the Mexican food they added to their steakhouse menu started selling like wildfire. They wanted to
6 comments
Read more