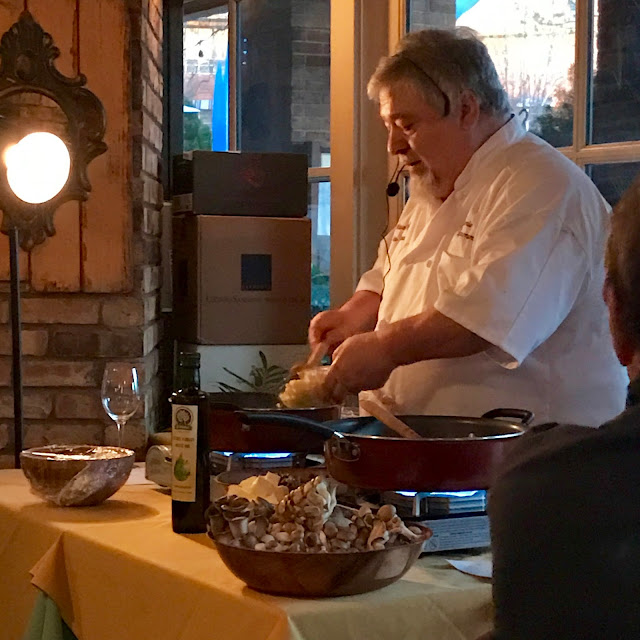 I found your Tuesday plans for the foreseeable future.

Every human wants to find the very best value possible for their money, understandably. That's why when I find a food/drink event at a great price that benefits you, as a diner, AND brings well-deserved awareness to a great restaurant, I can't wait to tell you all about it.

The friendly folks at Antonio Ristorante in Addison Circle invited us to try their Tasting Tuesday a couple weeks back, and to dine with them after the tasting event. Tasting Tuesdays pair three wines with three complementing hors d'oeuvres and, at $20 per person, an absolute must-add to your weekly dining calendar.


I'll start out by saying this wasn't the first time I've dined at Antonio. Antonio was one of the first spots where I became a "regular" after moving to Dallas in 2008. The northern suburbs trapped us for a while, and a couple of years ago we returned to Dallas proper, and have rekindled our love for this romantic little Italian restaurant. It's close enough to home now to even earn a regular spot on our rotation of to-go destinations. (Seriously, try the Fried Asparagus and the Gnocchi with Gorgonzola Sauce. You'll be addicted too.)

Chef Antonio Avona, the namesake of the restaurant, had returned to the kitchen during those years, and I'm pleased to say the food is now truly better than ever. In addition to Chef Antonio's return, new owners have also revamped their wine list (which is extremely reasonably priced, btw) and have now made it a non-smoking restaurant. Apparently they've also made Tasting Tuesdays a pretty regular thing, but this was the first time I've heard about it, sadly.

Tasting Tuesdays with Chef Antonio take place (obviously) on Tuesdays from 6-7pm.  Chef Antonio himself prepares one of the courses right in front of your eyes, AND sends you home with the recipe. So to review, that's three pours of wine and three small plates, for 20 bucks. Such a great deal, y'all. Take a peek below of the three courses we had during our tasting (descriptions in captions and on full  tasting menu shown below).


Of note is the fact that Chef Antonio himself shops local farmers markets to ensure the freshest and best quality of produce. And the produce absolutely shines. The tomatoes and mushrooms in the courses above were absolutely fresh and added so much to each dish.

I was honestly pleasantly satisfied, hunger-wise, after the tasting, but since they extended an invitation to stay for dinner, I was happy to indulge and to have the chance to chat with the new owner, and with Chef Antonio. We ordered to of the off-menu features for the evening. (You can ask Chef Antonio about them, if you want to try them, and if he has the ingredients, I think he'll be happy to cook them for you, too).

First up was the Avocado with Crab Meat. Again, the quality produce was key here, and the Russian dressing made the flavors really pop.

I don't often order rabbit, but this was easily the best rabbit dish I've had. The Pappardelle was fresh and perfectly complemented the meat. Chef Antonio gets his pasta from a local man who prepares it fresh daily. It's hard to find fresh pasta in Dallas, so this is yet another great thing about Antonio.

There was not room left, but we were told we couldn't leave without one of their souffles. Somehow we quickly made room for this delightfully fluffy Raspberry Souffle'.

Once again Antonio knocks it out of the park, both with dinner and his Tuesday tastings. Call 972-458-1010 to reserve your spot at the next one. You'll instantly feel at home at Antonio, and leave having met new friends.