Honestly, I've never really been less excited about trying a new place. My expectations weren't high because, I don't know, they just weren't. I'd heard rumors about them being bought/revamping the menu, so I was kind of apprehensive about trying a restaurant in transition. But alas, we took my mother and grandmother there friday night when they were in town for mother's day weekend. I decided to give it a try 1)because it's only 5 miles away, and 2)I'm doing research for a Best Mac 'n' Cheese in Dallas article and they have a lobster mac dish. 2 birds with one stone, right?

Anyway, made reservation on opentable and arrived 5 minutes before our reservation time at 7:30. The restaurant was probably 80% vacant, not a great sign. We sat at our table for roughly 8 minutes before our waitress came by and said she would be taking "great care" of us tonight and she would be right back. Fast forward another 12 minutes until she finally came back. We hadn't even gotten water yet, after 20 MINUTES of sitting. Horrible.

I was hoping the food would redeem the service, and the Lobster stuffed avocado appetizer was indeed impressive. It was chicken fried, with a cilantro lime cream sauce and pico. Would highly recommend this.

I tasted the lobster bisque my husband ordered, which was pretty good, nothing to expand on, just basic bisque. 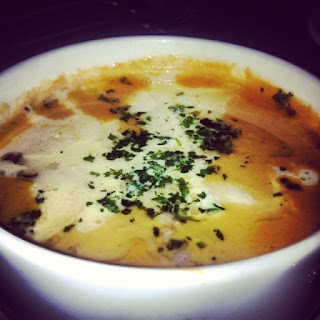 The Lobster Mac lacked chunks of lobster, there were scarce little snippets of lobster scattered sparingly through the dish. Average at best. Definitely not among Dallas' best.

The bass was the best of the 3, though it was a tad over cooked. That was the theme for the entrees, as the ravioli was a little overdone and had no sauce? (Who makes pasta with no sauce? Did they forget it?) And the ribeye that had been ordered medium came out a little more done that medium-well. They did replace the ribeye on the house (Thankfully!) but they defended the ravioli saying it had some sort of sauce on it, which it most definitely did not. The waitress also originally said the steak was prepared correctly, in argument with my husband, and then later blamed it on the lack of light in the restaurant when she realized that, indeed, the
dish was far overcooked.


Won't go back, met my low expectations. That is all.
Bailey's Prime Plus- Fairview
131 Stacy Road
Fairview, TX 75069
www.baileysprimeplus.com